END_OF_DOCUMENT_TOKEN_TO_BE_REPLACED

Blueberries added with apples make a great twist on the classic apple crisp.

If you want the recipe to make more, then increase the amount of apples and blueberries, and put it in a 9×13 dish instead of the smaller pan.

Mix together flour, oats, brown sugar, baking powder, cinnamon, and salt in a food processor, or bowl. Add in chunks of cold butter and process or manually cut in the butter until it is small crumbs. Set in fridge until needed.

For filling, core, cut, and peel apples, and put them a large bowl. Preheat oven to 375 degrees.

Place apple mixture in an 8×12 pan, and sprinkle all of the crumb topping over it, evenly, until completely covered.

Bake in preheated oven for 35 – 40 minutes until mixture is bubbling, and topping is brown.

If you are serving this recipe to more than 6 people, then add 3 more apples to the mixture, and increase the amount of blueberries, and then put the mixture into a 9×13 pan. Bake longer than usual. 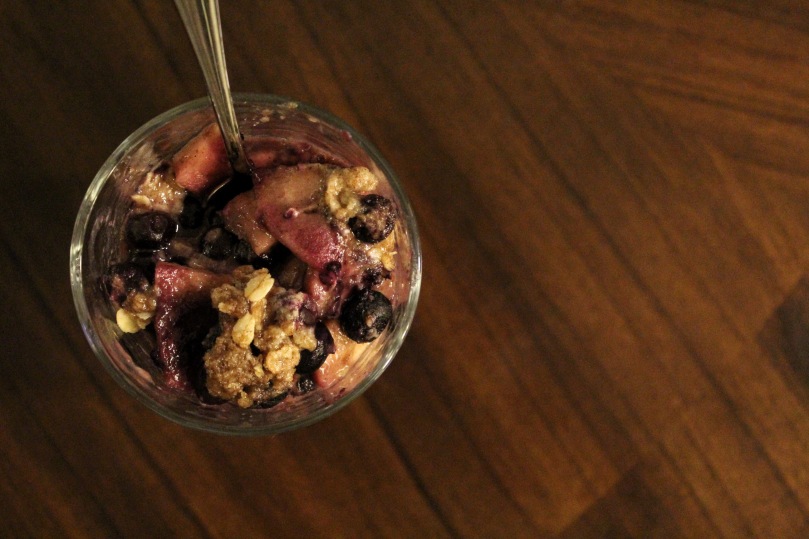 It’s time for the holidays; and Pumpkin Pie is a perfect dessert for either Thanksgiving or Christmas.

It is also as good as any pie for any special occasion. This recipe is ‘from scratch’ because I link to one of my posts explaining how to make the pumpkin puree from scratch instead of using store-bought canned pumpkin.

14 oz of Pumpkin Puree   (See my post on how to make pumpkin puree from scratch!)

If you really must, then you can use 1 can of canned, pre-made, factory-processed pumpkin.

If you want to make your own pureed pumpkin, follow my instructions here. If not, then just buy a can of pumpkin and continue:

In a small bowl whisk together the spices and salt. In a large bowl, beat together pureed pumpkin, sweetened condensed milk, and eggs. Then dump in the spices, and stir in well.

Pour mixture into an unbaked pie crust, and bake in preheated oven for about 10 minutes. Then set oven temp to 350, and bake for another 45 minutes, or until an inserted knife comes out clean.

Remove from oven, and rest for an hour or so, then place in fridge, and cool for another 6 hours until cold. 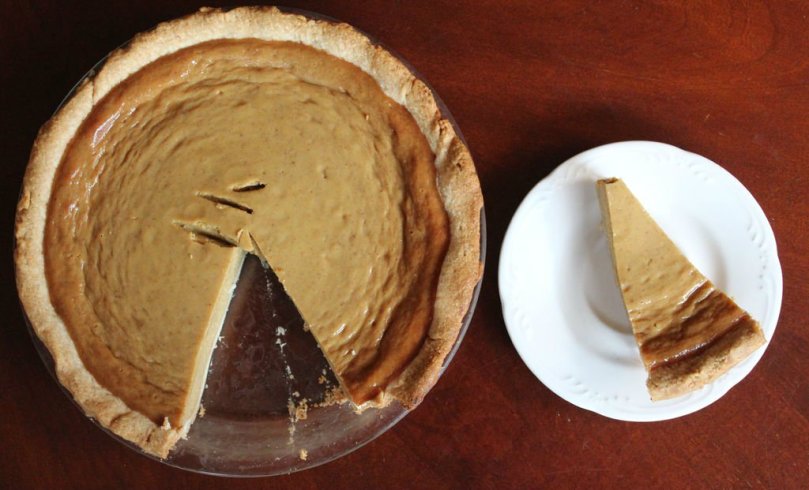 This Apple Blueberry Layer pie I made for a PI Day contest a while ago, so I engraved the Pi symbol engraved on the top of the crust. The Blueberries are layered on-top of the apples so as to show through the symbol Pi because of its great contrast to the Pie crust. 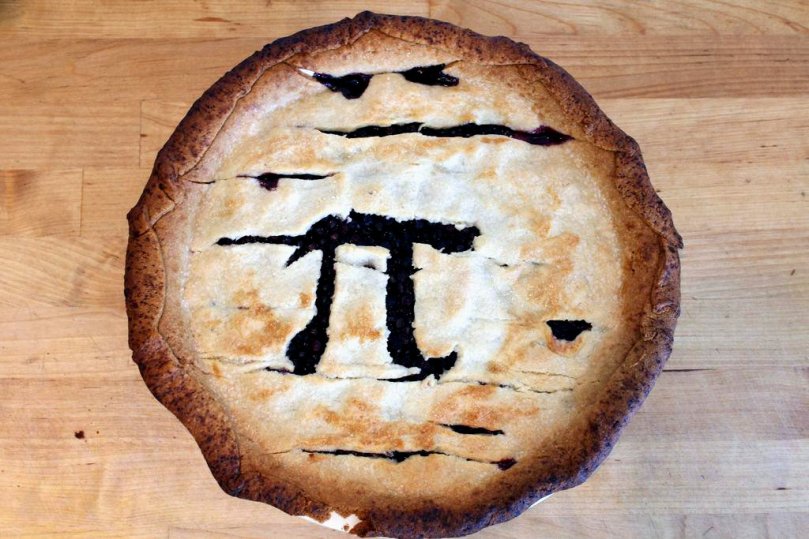 But apart from PI day, this is an very delicious twist on your everyday Apple Pie. 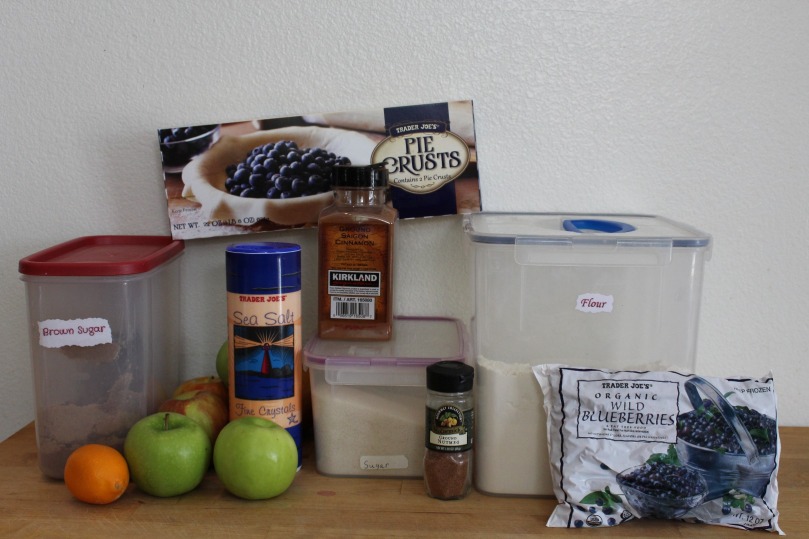 It would be best to have a deep-dish pie pan for this recipe.

Peel, core, and slice the apples, or use a very handy machine to do it for you. Toss the ‘peeledcoredsliced’ apples and lemon juice in a large bowl. Cut large pieces with a knife until all pieces are evenly sized.

Throw the flour-spice-sugar mixture over the apples, and toss to coat the apples completely.

Throw the apple mixture into the pie crust-filled pan.

Prepare the two cups of frozen blueberries by placing them in a colander and rinse thoroughly. Pat dry with paper towels. Even if you have fresh blueberries, you could also do this to wash them.

Evenly layer these blueberries over the top of the apples.

Now you may preheat the oven to 425 degrees. (Fahrenheit)

Place the other room temperature pie crust over the top neatly, and, using a fork, press across the circumference of the pie pan, pressing the top pie crust into the bottom crust.

Optional: Using a stencil, or your own brain, carefully cut the Pi symbol (rather largely) out of the top pi crust. You can use the cut-out crust as extra decoration on the top of the pie crust if you want to.

Beat an egg white until a bit fluffy. Spread this lightly over the top of the finished pie crust. Sprinkle with a bit of sugar.

Place pie in preheated oven (425) and bake for around 40 minutes, or until crust is golden, and fruit mixture is boiling.

Remove from oven, take a nice picture, and serve. Or, as I prefer, cool in fridge completely before serving.

Having the pie crust defrosted completely to room temperature is important. If it is not at room temperature, it is going to be alot harder to place in the pie pan, because it will crack all over the place.

Usually with recipes, you’ll see instructions at the very beginning to preheat your oven. But with a long recipe, like this, I find it is about half an hour or so to prep, so your oven will just be wasting energy. Because of this, you’ll only need to preheat your oven in this recipe 10 – 15 minutes before you’re ready to bake. It preheats at 425 degrees. See directions.

My Tweets
Back to top